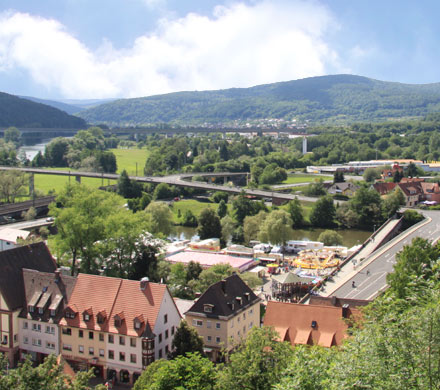 A walk through Gemünden a.Main
We begin our way by the Old Town in the Huttenschloss. The construction was established in 1711 by clerk Stern and went over later in the possession of the counts of Hutten, a high-powered Frankish nobility gender what her coat of arms above the main entrance reminds of.

Now we turn to the town, go about the old stone bridge which was established between 1598 and 1613 under the known Würzburger prince's bishop Julius Echter. The sandstone figure on the Brü-cke shows the Saint Johannes Nepomuk and is a copy whose original stands today in the passageway beside the town parish church.

With the excess of the old bridge we have crossed two water arms: The bigger one is the Frankish hall, unites with the sense, the smaller one a branch, called of the "Mühlgraben". Both flow after a little while into the Main. The house idyl along the Mühlgrabens is called small Venice. However, past it is with the idyl during the regular high water. 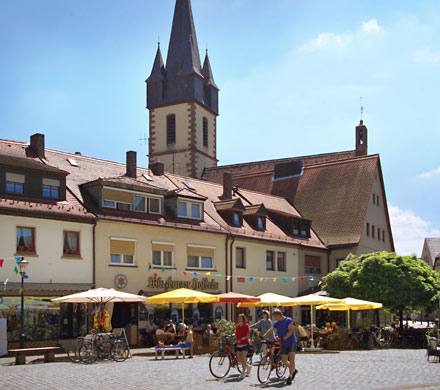 Now we cross the through road on the zebra crossing and stay a little bit on the small parking bay with the only preserved town gate, the Mühltorturm. Gemünden had in the group with the curtain wall, from the castle down in the Mühltor, down to the Mühlgraben, there along at the Main past which still to available round pileworks and from the second one again led just high to the castle, two town gates; unfortunately, the second one, the upper gate, does not stand any more. Probably, however, rests of the old curtain wall are received.


We go the narrow way compared with the Mühltorturm down to the Mühlgraben, here on the left further up to the mouth to the Main, past in the owl's tower, one of the round towers. Now the way leads a little piece mainaufwärts and you enjoy the bank scenery. If one looks up now to the castle, one clearly sees the remains of the curtain wall course. By the underpass it goes in the pedestrian crossing light about the B 26 - and who has exactly paid attention, has noted on the right side of the underpass the high water states with annual figures.

We reach the witch's tower and go on the left along the town wall up to the Amtsschreiber-Pförtchen which was higher up to the destruction one more floor. This is it one of originally two little gates which enabled probably above all to the skippers and fishermen to reach the Main also after closing the town gates.

If we run away by the Amtsschreiber-Pförtchen and head through the lane Kirch of the church, we win an impression as closely and winding the cultivation of the whole medieval city centre had been before the destruction.

In Obertorstrasse we can look at the a little preserved old half-timbered houses and stand before the town parish church Saint Peter and Paul. The war has left from the old Late-Gothic church only the foundation walls and the tower basement with the cross ribbed vault. Only a few unique pieces have survived.

Today thus the church presents itself after the reconstruction in 1948-1950 emphatically simply and one has tried above all inside warily a synthesis of old person and new. In the forehead front a representation of both cartridges Peter and Paul and a commemorative table is found on the left to the reconstruction. Below the clock an old, not dateable town coat of arms is to be seen an old, not dateable town coat arms.

The market well was created on the occasion of the first phase of the Old Town renewal, the encirclement of the well shows the coats of arms of the incorporated Gemündener parts of town, the middle column is formed with guild sign.

Now comfortably we come along on the way to the castle; besides, we cross the marketplace and begin the rise behind the castle cafe on the right side. Finally, come you are recompensed with a miraculous view in the Main valley. Before us rises the typical mountain cone of the Einmals on which a soldier's cemetery with a chapel is. Through the mountain a tunnel of the new quick route of the Federal Railroad leads. On this distance segment with the Main bridge, the biggest free-tense pre-stressed concrete-railway bridge without middle prop (84 m), the intercity express on his record journey 1988 achieved the top speed of 406.9 km/h.

The oldest owners of the scissors castle were the counts of Rieneck. When exactly the construction was, cannot be ascertained any more. The first documentary news falls the 13th century. Nevertheless, Si-cher is that Gemünden is substantially older, because one says that already Karl the tallness travelled by the fishing village at that time. The castle came in 1469 under bishop Rudolph von Scherenburg to the high-level pencil Wurzburg and was inhabited till the 18th century.

By the castle court you walk out on the castle way which leads you in a big curve over the school mountain again in the town down. He leads to us on the in 1984 planted vineyard of the city of Gemünden where the "Scherenberg" wine matures.

A detailed city guide you can get in the Tourist Information, Price: 1,00 Euro

For further information we stand to you with pleasure at the possession.

We wish you a rather nice stay.

Im Rathaus: Was erledige ich wo? 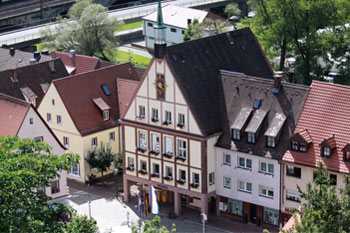